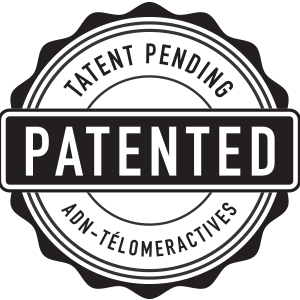 The Human By Nature company carries out studies designed to prove the interest of ADN Téloméractives. These studies are the same as those used for medicines. Food supplements do not have to undergo these trials, but we considered it essential to carry them out and give you the results – answers that give complete satisfaction and conclusions that speak for themselves.

In a private-public collaboration, evaluation of DNA®-Telomerates™ with respect to decreasing levels of pro-inflammatory mediator production in human astrocytic cells with inflammation disorders linked to a major genetic risk factor in sporadic Alzheimer’s disease.

Within the framework of a private-public collaboration, evaluation of DNA®- Telomerates™ as to the analysis of various molecular parameters related to the amyloidogenic cascade – Effect of the molecule on the production of Ab peptide and neurotoxic derivatives from APP splitting. Mixed cultures of human neurons/astrocytes in Alzheimer’s disease.

The objective of this study is to evaluate the energetic potential of DNA®-Telomerates™ through an image-based engineering process (patented ultraviolet electron capture process with mathematical translation of ion winds – TFF).

Conclusion: the study shows that, after several captures, this potential is not only very significant, but also superior to other products of the same type.

The next, pending study (summer 2020): Evaluation of the neuroprotective effects of DNA-Telomeractives on TH-positive dopaminergic neurons damaged by MPP+ in a Parkinson’s disease scenario. Neuro-Sys has been appointed.

HBN is entrusting the E-Phy-Science Laboratory with a new in vivo study. The aim is to check the passage of DNA-Telomeractives through the blood–brain barrier (BBB). Electrophysiological readings of the subjects’ neuronal activity, paired with behavioural tests, will also enable them to be matched with deficient human cognitive frequencies – Alzheimer’s disease (beta-amyloid 1- 42). E-Phy-Science is a leading-edge company in electrophysiological in vitro, in vivo and ex vivo pathology, working mainly for Japan and the USA.

Conclusions: Long-term treatment (10 weeks in rodents) with Telomeractives DNA increases synaptic transmission and memory capacities in animals with a high level of Aβ (natural Aβ (1-42) due to age or artificial Aβ (1-42) by injections in mice of a human Alzheimer Beta amyloid.

The parallel study (BBB) demonstrates an extra-cellular activity which can only be determined through a 3D model, the electro-physio-pathology can only explore the intra-cellular path. However, the significant improvements reflect the crossing of the blood-brain barrier; only quantification requires the use of a different model.

For patent-related reasons, this study can only be consulted by the scientific community.

AOP System, a company specialising in the assessment of antioxidant intracellular activity by direct measurement from a live cell model, has been appointed by HBN to assess the potential response to DNA-Telomeractives in the Oxidative Stress pathway of human SH-SY5Y neurons.

The AOP System company, specializing in the assessment of antioxidant intracellular activity by direct measurement on living cell models and the Nrf2 transcription pathway , was appointed by HBN to assess the potential response of DNA-Telomeractives in the Oxidative Stress pathway, alongside aggregates of amyloid plaques and Tau phosphorylation in Alzheimer’s disease.

The Neuro-Sys company, an innovative company specializing in in vitro models of neurodegenerative diseases, has been appointed by HBN to assess the potential response of DNA-Telomeractives in Alzheimer’s disease, using 1/42 amyloid peptides (Human Alzheimer’s) , when the majority of analyses are based on peptide 25/35 (rodent Alzheimer’s).

DNA®-Telomerate™ significantly protected neurons from degeneration to an extent similar to donepezil (the reference molecule).

A significant beneficial effect was also observed on the neural network.

HBN has relied on Santarelli company – French & European Patent, Trademark and Design Attorneys – to file a French patent application concerning the use of DNA-Téloméractives © for the treatment of neurodegenerative disorders.​

Once accepted in France N0 1851298, an application will be filed for Europe, and then Canada.

Study in a Parkinson’s model. Cells of the human-derived SH-SY5Y cell line, differentiated into neurons, exposed to an inductor of Parkinson’s-type phenotype (rotenone). These are significant for ageing.

Forthcoming study in collaboration with the HCS Pharma research laboratory: study in an Alzheimer’s model. Cells of the human-derived SH-SY5Y cell line, differentiated into neurons, exposed to an inductor of Alzheiner’s-type phenotype (aftin).

This study sought to evaluate the in vitro neuroprotective effects of the DNA Téloméractives © food supplement on cell models of Alzheimer’s disease used to study neurodegenerative diseases. Neurodegenerative disease models can be developed in the laboratory using distinct neuronal cell lines. In the case of chemical inducers, Alzheimer’s disease models are obtained from the SH-SY5Y cell line of human neuroblastoma. The neuroprotective properties of both candidates are evaluated following a neurotoxicity test, counting neurons and measuring their length.

Aftin is an inducer of the Alzheimer phenotype via the inhibition of complex I and oxidative stress generation. This stress induces a cytotoxic effect which characterises in a reduction of neurite length, as well as by cell death.

Conclusion: DNA Téloméractives © has a significant action on reducing the impact of Aftin.

Most recent study in collaboration with the LX Repair genetics laboratory: defining the mechanisms of action of ADN-Téloméractives.​

As we are currently drafting a patent application for DNA protection, we cannot yet announce the results.​

Once our request has been approved, in a few months, we will publish them online as they are remarkably good

As we are currently drafting a patent application for DNA protection, we cannot yet announce the results.

DNA protection. The PIG-A whole blood test is based on measuring the mutation rate of the PIG-A sentinel gene by visualisation of the flow cytometry of circulating cells that are deficient in GPI-anchored proteins (glycosyl-phosphatidyl-inositol). It consists in identifying mutated cells for the PIG-A gene after labelling cells with fluorochromes specific for the GPI anchor, or proteins associated thereto.

For reasons of methodological confidentiality, only a summary of the results is available.

Conclusion: We have thus experimental evidence that the DNA Téloméractives © compound significantly decreases the genotoxicity and mutagenesis induced in vivo by a carcinogenic mutagenic substance without a threshold. This reduction demonstrated under “worst case” conditions may be related to “protection” upstream of the primary lesion and/or an increase/optimisation of the primary lesion’s DNA repair phenomena.

DNA repair: ExSy Spot: Function measurement, Quantitative comparison between different DNA repair pathways, Pathway activation of biomarkers. The DNA repair enzymes contained in the extracts excise the lesions (or the DNA fragment surrounding the lesions) and incorporate a fluorescent label (dCTP-Cy3) during DNA resynthesis.  The fluorescent signal is quantified using a scanner. It is proportional to the Excision/Resynthesis capacities of each extract for each lesion.

Conclusion: DNA Téloméractives © has a significant stimulating action on the repair of Glycols. The enzyme NTH1 that repairs glycols is also involved in telomere maintenance, in connection with biological aging.

As we are currently drafting a patent application for DNA protection, we cannot yet announce the results.

DNA protection. The single cell gel electrophoresis assay or comet assay is a test which makes it possible to measure the strand breaks induced directly by a genotoxic agent, indirectly during the enzymatic processes of damage repair, and finally during secondary processes of DNA fragmentation…

For reasons of methodological confidentiality, only a summary of the results is available.

Conclusion: We have thus experimental evidence that the DNA Téloméractives © compound significantly decreases the genotoxicity and mutagenesis induced in vivo by a carcinogenic mutagenic substance without a threshold. This reduction demonstrated under “worst case” conditions may be related to “protection” upstream of the primary lesion and/or an increase/optimization of the primary lesion’s DNA repair phenomena.

The TOXEM laboratory, which specialises in medical genotoxicity and genetics, has been commissioned by HBN to determine the ability of the ADN-Téloméractives© product to act as a “molecular crutch”, enabling the protein TP53 (tumour suppressant gene) to recover its functions (transcriptional activity, regulation of the cell cycle etc.), as otherwise the critical loss of information introduces a mutation characteristic of carcinogenesis.

Conclusion: ADN-Téloméractives© is capable of partially restoring the transcriptional activity of certain TP53 proteins. This restoration could potentially enable the mutated protein to play an important role in maintaining the integrity of the genome (DNA restoration, apoptosis – eliminating cells with irreparable DNA damage – damaged telomeres) and thus in preventing tumoral transformation.

In TP53 MT234, the recovery of lost function reaches more than 26% in 24 hours, 7% more than with Amifostine® (cytoprotective drug used in cancer chemotherapy).

The TOXEM laboratory, specialising in medical genotoxicity, was commissioned to demonstrate the anti-genotoxic potential of the ADN-Telomeractives© product.

SOS-Chromotest is a colorimetric assay that implements a genetically modified strain of e. Coli, in which a partial gene deletion is carried out as well as a fusion with the genes. The ‘SOS’ system is implemented when DNA is damaged. If a defect in the DNA causes any replication, a protein binds to the locked zone and goes into the active state.

Conclusions: in the presence of direct and pro-genotoxic agents, the DNA Telomeractives® product induced a significant dose-dependent decrease in the SOSIF obtained for this reference genotoxic molecule.

The TOXEM laboratory, specialising in medical genotoxicity, was commissioned to demonstrate the non mutagenicity of the ADN-Telomeractives© product.

The conclusions of this analysis do not reveal any mutagenicity of ADN Téloméractives©, with or without metabolic activation (that is to say with the basic product or when the product has been degraded by digestion), whatever the concentration tested.